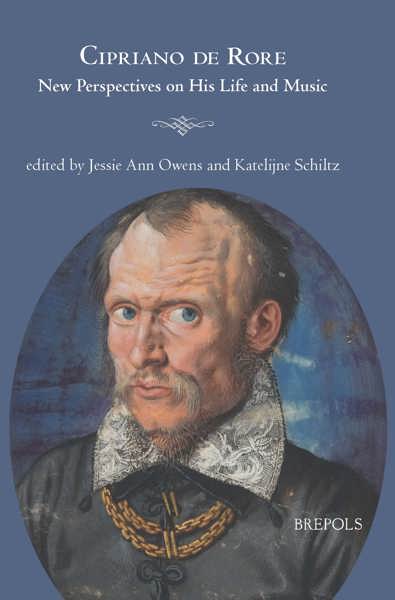 New Perspectives on his Life and Music

“(…) this milestone volume (…) will be the steady companion for future students of Rore and a game changer in research on his life and music.” (Christian Thomas Leitmeir, in Consortium Musica, June 2018, p. 110)

In 1586 the poet Jean Mégnier described Cipriano de Rore as ‘inventif’, a composer who searched out ‘nouveaux accords’. The essays in this volume flesh out various ways in which Mégnier’s characterization rings true. One group of essays deals with de Rore’s biography and strategies of patronage from his early years in Italy to the end of his life. A second is concerned with sources and repertoire, ranging widely across genres. A third presents a series of new analytical approaches to Cipriano’s music. The volume concludes by considering his reputation through the lens of music historiography. To mark the 500th anniversary of his birth (1515 or 1516), we offer these new perspectives on the life and music of this major figure in Renaissance music.

I. Biography and Patronage

Although not much is known about de Rore’s arrival in Italy or his whereabouts, patrons and connections before his employment at the court of Ferrara in 1546, Bonnie J. Blackburn has been able to trace a fascinating network of people that converges in Brescia in the circle around Count Fortunato Martinengo. De Rore seems to have been part of a group of composers who were invited by the count, but it is also clear that he was in effect working as a freelance composer.

By concentrating on Ercole’s daughter Anna and his wife, the Duchess Renée de Valois, Stras focuses on the periods of Cipriano’s arrival at and departure from Ferrara respectively. She investigates de Rore’s settings of choruses from Giambattista Giraldi Cinzio’s tragedy Selene, which is linked to negotiations for the wedding of Anna d’Este with the Duc d’Aumale in 1548. Stras furthermore proposes a reading of a number of de Rore’s madrigals in the light of growing tensions between Ercole and Renée. De Rore’s sympathies for Ercole’s Protestant wife not only point towards the political and religious situation in Ferrara, but might even explain why Ercole’s successor Alfonso d’Este refused to reappoint Cipriano as maestro di cappella.

Franco Piperno highlights de Rore’s connection with another major Italian patron, Guidubaldo II della Rovere, the duke of Urbino. He discusses several occasional works, madrigals and motets, that were written both early in Cipriano’s Italian years and near the end of his life. Piperno argues that de Rore’s music not only had a profound influence on musical life at the court of Urbino, but was also instrumental in strengthening Guidubaldo’s ties with other rulers and courts, such as Ottavio Farnese at Parma, de Rore’s last patron.

Van Orden reopens the debate about the pieces’ note nere notation and investigates both the meaning and origins of black-note writing. Whereas it was a short-lived trend in Venetian prints, she shows that the history of this notation goes back to the French chanson. By calling attention to the cross-fertilization between the two genres and demonstrating it with concrete examples, she discusses the expressive potential that de Rore explores for his dark settings of the poetry by Petrarch and contemporary writers.

It is the literary choices and the way they shape the structure of the book from 1542 that leads Massimo Ossi to engage in a comparison between the organization of this print and its later editions by both Girolamo Scotto and Antonio Gardano. Indeed, between 1542 and 1562 the print underwent significant transformations, with pieces being added, dropped and arranged in different orders. Ossi investigates the reasons for these changes and argues that poetic considerations played a major role in this process. Although the modal organization, for which the Scotto print from 1542 is so well known, was thus distorted, the layout of the later editions follows other, equally valid criteria, which bring into play literary developments such as petrarchismo. He proposes a reconsideration of who was responsible for the makeup of the editions.

Among Cipriano’s motets, there are a considerable number of four- and five-voice compositions for equal voices (a voci pari). This repertoire is the subject of an essay by Katelijne Schiltz, who investigates the works’ transmission history—many of the motets appear for the first time in the sumptuously illuminated Munich Mus.ms. B and keep appearing in manuscripts and prints until the late sixteenth century—and analyses them in terms of their word-painting, use of repetition and melismas. She proposes a dating for many of the a voci pari works to the 1540s, based not only on a comparison with Adrian Willaerts’s Musica nova, which also contains a great number of four- and five-voice works for low equal voices (printed in 1559 but composed some twenty years earlier), but also on an investigation of the French branch of the tradition of equal-voice writing.

Andrea Gottdang brings an art historical perspective to her investigation of one of de Rore’s most important sources, Munich Mus.ms. B, the luxurious illuminated choirbook of de Rore’s motets commissioned by Duke Albrecht V of Bavaria. Based on her investigation of the illuminations in the first half of the sixteenth century, she shows that, contrary to commonly held views, the illuminations by Hans Mielich should be considered not as a remnant of an outdated practice, but rather as a new heyday of book painting. By scrutinizing the layout of individual folios from the manuscript and studying the relationship between music, text and words—including Mielich’s struggle with initials, framing borders and the two-dimensionality of the page—Gottdang tries to trace the chronology of work on the manuscript, which seems to have paved the way to Lasso’s Penitential Psalms (Munich Mus.ms. A).

As Bernhold Schmid shows, settings of the poem by Guillaume Guéroult were numerous in the sixteenth century. The story of the chaste Susanna, as it is told in an apocryphal chapter from the book of Daniel, was also being related musically in Latin, English, German and Flemish. Many of the compositions are based on Didier Lupi’s eponymous chanson, including de Rore’s, which was published posthumously in 1570. Schmid reports his discovery of a German contrafact Susannen frumb in a manuscript from the Gymnasium illustre in Brieg / Brzeg and discusses the musical and textual differences between the two versions.

In a number of case studies, Milsom explores his theories on fuga in the early works of de Rore. He comes to the conclusion that Cipriano often flexed his fuga, meaning that he adjusted intervals and/or durations as the subject passes from one voice to the other. In addition to developing a vocabulary to discuss the phenomenon of flexed fuga, Milsom tries to understand how these pieces were composed and investigates the design of each composition against the background of modal and textual considerations.

De Rore’s four-voice madrigal setting of Giovanni della Casa’s sonnet O sonno circulated widely among later generations of composers: Giovanni de’ Bardi mentions it—together with other madrigals by Cipriano—in his Discorso sopra la musica antica e’ cantar bene, addressed to Giulio Caccini (1578-79). This madrigal and its reception in the Florentine camerata is the subject of Hartmut Schick’s essay. He analyses the piece in terms of text treatment and harmonic language, and contextualizes de Rore’s setting by comparing it with other late madrigals by the composer and with Giaches de Wert’s eponymous madrigal. The fact that the latter’s setting of O sonno, published in 1558 (only one year after de Rore’s version) is much more contrapuntal than de Rore’s homophonic-declamatory piece, seems to point to the conclusion that only in his later collections would Wert adopt de Rore’s later style.

Jessie Ann Owens offers a detailed study of one of Cipriano’s secular Latin-texted works, Dissimulare etiam sperasti, a setting of Dido’s speech from the fourth book of Virgil’s Aeneid. In this speech, a wide range of emotions is displayed, and Owens analyses de Rore’s strategies for their dramatic representation in music. One of the most apparent features of Dissimulare etiam sperasti is that the number of voices grows from five to six to seven—a unique arrangement in de Rore’s oeuvre—thereby creating a kind of crescendo. But he also sought to underline Dido’s emotional state through a clever use of textual repetition, homophonic writing and harmonic choices, especially shifts in tonal compass. Owens links this with Claudio Monteverdi’s equally stunning setting of a female plaint: the famous Lamento d’Arianna. She discovers striking expressive parallels between the two settings, which not only might suggest that Monteverdi knew de Rore’s setting of Dido’s speech, but also that the exploration of the representation of female emotion does not start with him, but goes back at least as far as Cipriano.

Anthony Newcomb focuses on three madrigals, all of which were published posthumously and for which the attribution has been questioned: Che giova dunque and Alme gentili, both printed in the collection Musica di XIII. autori illustri from 1576, and Se com’il biondo crin from de Rore’s fifth book of madrigals (1566). Newcomb’s analyses, which take into account Cipriano’s treatment of crucial moments in the text, varied repetition, cadences and other features, argue that these madrigals represent three distinct sides de Rore’s late madrigal oeuvre.

The final essay of this book approaches de Rore’s reputation through the lens of music historiography. Taking Alfred Einstein’s Italian Madrigal as a point of departure, Sebastian Bolz investigates Cipriano’s role in the narrative of this influential book: he is proclaimed an innovator, a modernist, a self-conscious artist. Bolz then relates this to Einstein’s other publications, which use a similar vocabulary for periodization and for describing a composer’s personality, and shows that they can be read against the background of historiographic role models, such as writings by Heinrich Wölfflin, Jacob Burckhardt and Oswald Spengler. 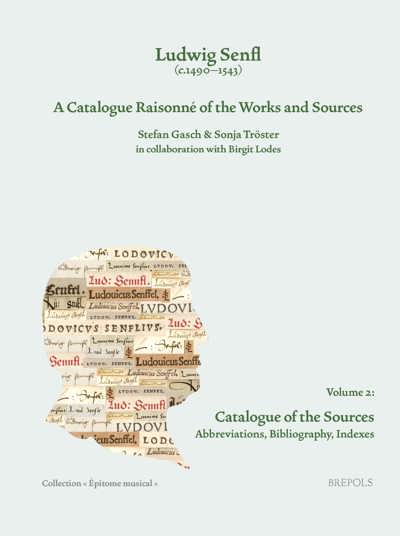 Ludwig Senfl (c.1490–1543): A Catalogue Raisonné of the Works and Sources View publication 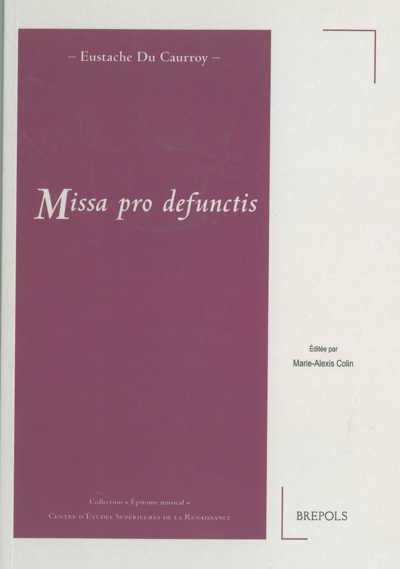 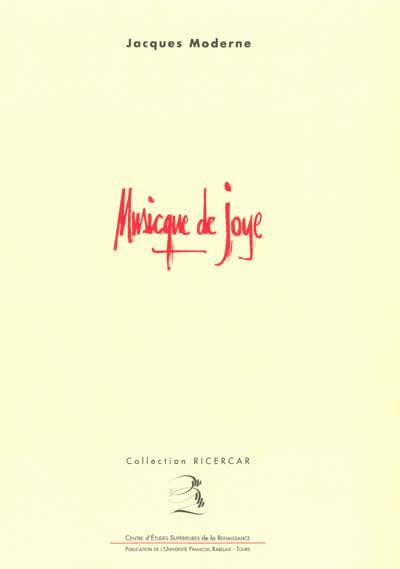 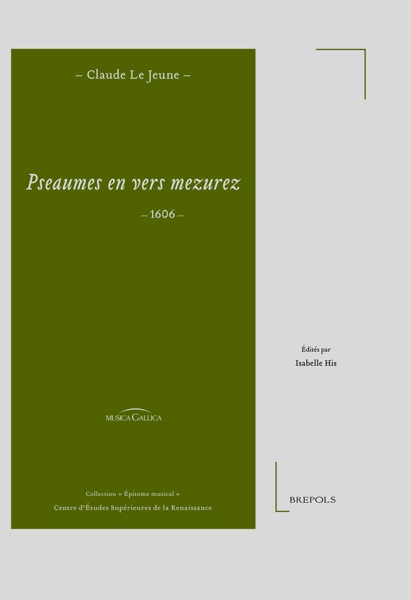