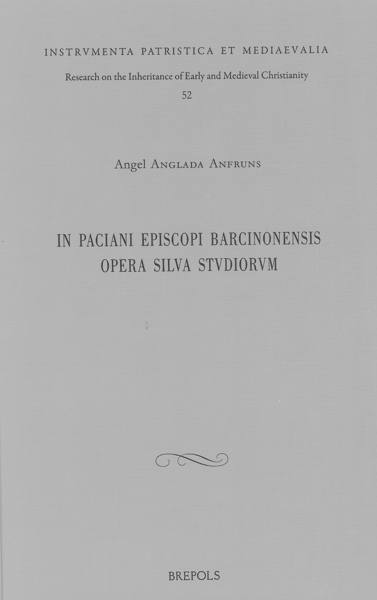 The study and the production of a critical edition of the works of Pacian, bishop of Barcelona (fourth century), have been the life’s work of Angel Anglada Anfruns. He has published many articles in miscellanies and high ranked journals since the 1960s, and also some in less-accessible periodicals. Updated versions of these contributions, most of which are written in Spanish, have now been gathered for the first time in a volume entitled Silva studiorum. They deal with the manuscript transmission and the history of the printed versions of Pacian’s opera, the syntactic structure (particularly the clausulae) and particular problematic passages in the bishop’s writings. The volume concludes with an index of the passages which have been discussed in detail. The articles offer a general view of the reception of Pacian’s works down the ages and list the author’s arguments behind specific editorial decisions. It is the perfect companion volume to the edition of Pacian’s complete works published in Corpus Christianorum, Series latina 69B (2012).

Angel Anglada Anfruns is professor of Latin Language and Literature at the Universidat de Barcelona.