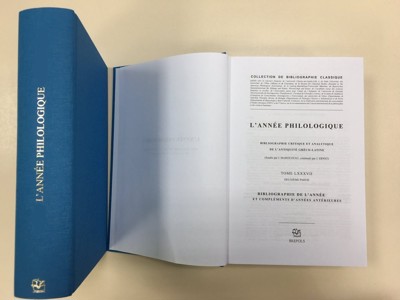 L’Année philologique was founded in Paris in 1926 by Jules Marouzeau, and has long been considered an indispensible resource by the research scholars who are its intended users. Its goal is to collect annually scholarly works relating to every aspect of Greek and Roman civilization (authors and texts ; literature ; linguistics ; political, economic, and social history ; attitudes and daily life ; religion ; cultural and artistic life ; law ; philosophy ; science and technology ; and the history of classical studies). Significant space is accorded to the auxiliary disciplines (archaeology, epigraphy, numismatics, papyrology and paleography). Book notices are followed by a listing of reviews as these are published ; notices of articles include an abstract in English, German, Spanish, French, or Italian. L’Année philologique is international in character, not only in terms of the origins of the publications it indexes but also in the diversity of countries where the teams collaborating in its compilation are located (France,Germany, Italy, Spain, Switzerland, and the United States). Every year, its contents are added to the on-line database « L’Année philologique sur Internet », which enables consultation of the entire collection by means of multiple search criteria.