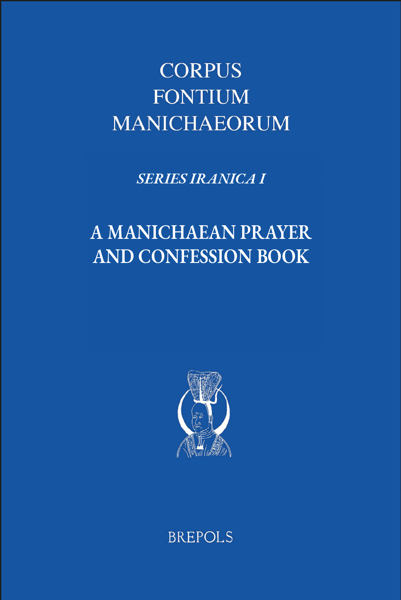 A Manichaean Prayer and Confession Book

This new edition of  The Manichaean Prayer and Confession Book also includes the supplementary Sogdian texts which Henning added to his ‘BBB’.

Nicholas Sims-Williams is Emeritus Professor of Iranian and Central Asian Studies at SOAS University of London. His research is focused on Sogdian, Bactrian and other Iranian languages of pre-Islamic Iran and Central Asia. His publications on Manichaean Sogdian include Dictionary of Manichaean Sogdian and Bactrian (jointly with Desmond Durkin-Meisterernst), Corpus Fontium Manichaeorum, Dictionary of Manichaean Texts, III/2, Brepols 2012; 2nd revised and enlarged edition 2021).

John S. Sheldon is an independent scholar who has been affiliated with Macquarie University, Sydney, and St. John’s College, Cambridge. He co-authored Greek and Latin Sources on Manichaean Cosmogony and Ethics (Brepols 2010) and Texts of Greek and Latin Authors on the Far East: From the 4th c. B.C.E. to the 13th c. C.E. (Brepols 2010).

Zsuzsanna Gulácsi is Professor of Art History and Asian Studies at Northern Arizona University in Flagstaff. Her research focuses on materiality of religion, codicology, and iconography, with special attention to Manichaean, Jewish, Eastern Christian, and Buddhist art. She is the author of Mani’s Pictures (Brill 2015), Mediaeval Manichaean Book Art (Brill 2005), Manichaean Art in Berlin Collections (Brepols 2001) and dozens of articles.

The Manichaean Prayer and Confession Book is the best-preserved Manichaean book found in the Turfan area and the only one which survives in the form of a bound codex. It constitutes a precious treasure-trove of information on its three Iranian languages, on the Manichaean religion itself, and on Manichaean codicology and book-art. The surviving parts of this beautifully decorated miniature paper codex include Middle Persian and Parthian hymns and readings for the Bema festival, the high-point of the Manichaean liturgical calendar, followed by an elaborate confessional formula for the Elect in the Sogdian language. Until now this manuscript has been accessible for scholarship only from its 1937 edition in German by W. B. Henning, titled ‘Ein manichäisches Bet- und Beichtbuch’ (BBB). This new edition provides the first English translation by Nicholas Sims-Williams, the first codicological study by Zsuzsanna Gulacsi and an introduction by John S. Sheldon. It also includes the supplementary Sogdian texts which Henning added to his ‘BBB’. It incorporates magnificent colour photos, codicological diagrams, and digital reconstructions never seen before. This beautifully-produced volume appropriately inaugurates the Series Iranica of the Corpus Fontium Manichaeorum.