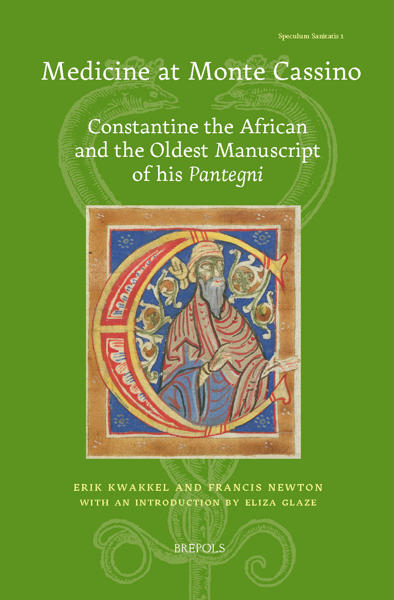 Constantine the African and the Oldest Manuscript of his Pantegni

Medicine at Monte Cassino offers unprecedented insights into the revolutionary arrival of Arabic medicine to medieval Europe by exploring the oldest manuscript of Constantine the African’s Pantegni, which is identified here, for the first time, as a product of the skilled team of scribes and scholars working directly under the supervision of Constantine himself at the eleventh-century abbey of Monte Cassino.

“This groundbreaking study of a single manuscript, The Hague, Koninklijke Bibliotheek, 73 J 6, its production, use, and significance, has important implications not only for our understanding of a pivotal moment in the transfer of Arabic medical scholarship to the Latin west, but also for the study of knowledge production and transfer in late eleventh-century Montecassino, and for research into southern Italian book production and monastic scribal culture in general.” (Andrew J. M. Irving, in Manuscript Studies:  A Journal of the Schoenberg Institute for Manuscript Studies, 6/1, 2021, p. 190)

“Kwakkel and Newton’s study sheds new light not only on Constantine’s work but also on the intellectual life and book culture of Monte Cassino in its heyday.” (Outi Merisalo, in Speculum, 97/2, 2022, p. 529)

“As the first book in the new series from Brepols, ‘Speculum Sanitatis: Studies in Medieval and Early Modern Medical Culture (500–1800)’, Erik Kwakkel and Francis Newton have provided an exceptional inaugural volume (..) Ultimately, Kwakkel and Newton have produced a monumental study with major implications for our understanding of the Pantegni, Constantine’s translation project, and its long-term developments.” (CLAIRE BURRIDGE, in Early Medieval Europe, 29/4, 2021, p. 631-634)

Erik Kwakkel is book historian and Professor at the University of British Columbia. Devoted to the relationship between the appearance of medieval manuscripts and the contexts of their production and use, his NWO-sponsored project ‘Turning Over a New Leaf’ (2010-2015) studied twelfth-century manuscript culture. Through a lively social media presence, Kwakkel brings medieval books to a diverse public audience.

Francis Newton obtained his PhD from University of North Carolina at Chapel Hill, and is now Professor Emeritus of Classical Studies at Duke University. His publications focus primarily on medieval Latin, Augustan poets, Latin paleography, textual criticism, the history of text transmission, and colophons in Latin manuscripts. Newton’s contributions to the study of the manuscripts and the Beneventan script of Monte Cassino are especially renowned in the field of Manuscript Studies.

Eliza Glaze holds a PhD from Duke University and is Professor of History at Coastal Carolina University where she teaches the history of medieval Europe and the Mediterranean, the history of medicine, digital studies, and manuscripts and archives. Her research focuses upon medieval Latin medical texts and their transmission from late antiquity through the twelfth century, specializing in medieval medical manuscripts that transmit the texts of, or were productions of, Southern Italy.

Fleeing his North-African homeland for Italy, Constantine the African arrived in Salerno and then joined the abbey of Monte Cassino south of Rome in c. 1077. He dedicated his life to the translation of more than two dozen medical texts from Arabic into Latin. These great efforts produced the first substantial written body of medical theory and practice in medieval Europe. His most important contribution, an encyclopedia he called the Pantegni (The Complete Art), was translated and adapted from the Complete Book of the Medical Art by the Persian physician ‘Ali ibn al-‘Abbās al-Mağūsī (d. 982). This monograph focuses on the oldest manuscript of the Pantegni,Theorica, which represents a work-in-progress with numerous unusual features.

This study, for the first time, identifies Monte Cassino as the origin of this oldest Pantegni manuscript, and asserts that it was made during Constantine’s lifetime. It further demonstrates how a skilled team of scribes and scholars assisted the translator in the complex process of producing this Latin version of the Arabic text. Several members of this production team are identified, both in the Pantegni manuscript and in other copies of Cassinese manuscripts.

The book breaks new ground by identifying a range of manuscripts produced at Monte Cassino under Constantine’s direct supervision, as evidenced by their material features, script, and contents. In rare detail, this study explores some of the challenges met by ‘Team Constantine’ as they sought to reveal new knowledge to the West, which in turn revolutionized medical understanding throughout medieval Europe.

This is really a quite remarkable study, utterly transformative of our understanding of one of the turning points in the history of Western civilization, the moment when Greco-Arabic medicine was introduced into the Latin European world.

Introduction. Constantine the African and the Pantegni in Context (by Eliza Glaze)

Chapter 1. The Dossier of the Scribe

Appendix B. The Biographies of Constantine the African

Appendix C. Latin Text and English Translation of the Prologue of the Pantegni