A collection of essays on saints from the North of England, from 600-1500.

“Saints of North-East England is an important collection of essays that will reinvigorate the study of Anglo-Saxon, especially northern, saints (…) The volume's editors Margaret Coombe, Anne Mouron, and Christiania Whitehead are to be praised for bringing together such a diversity of voices and perspectives on a well-studied but certainly not exhausted topic (...) the book's production value is otherwise as high as one has come to expect from Brepols. These essays not only exemplify the work still to be done on northern saints' cults, but also model approaches that could be used to interrogate the late medieval iterations of southern Anglo-Saxon saints' cults. It is a collection that opens doors, and it will be exciting to see the new studies on northern saints that follow from it." (Cynthia Turner Camp, in The Medieval Review, 09.10.2018)

“Short bibliographies are included at the end of each chapter, and there are several illustrations to accompany the focus on visual culture that weaves through this exciting new volume.” (Medium Aevum, 88/1, 2019, p. 193)

“The quality of individual essays is consistently high. The engaged reader will be well rewarded by this informed collection.” (Colin Ireland, in Peritia Journal of the Medieval Academy of Ireland, 30, 2019, p. 268)

“It is overall a very good collection of some of the best scholars of Northumbrian history, literature, architecture, and art history, with some refreshingly different perspectives on the region (…)” (Samantha Leggett, in Parergon, 36/1, 2019, p. 195)

During the seventh and early eighth centuries a number of influential saints’ cults were established within the Anglo-Saxon kingdom of Northumbria, most notably the cult of St Cuthbert served by the monks of Lindisfarne. Reacting to the Danish incursions of the ninth century, the Lindisfarne community gradually migrated south to Durham, where, in the early eleventh century, the relics of further Northumbrian saints were collected to join those of Cuthbert. Following the re-foundation of the Durham church as a Benedictine house in 1083, the community sought to legitimise itself by stressing its links with an ancient, saintly past. A century later, the cults of new hermit saints such as Godric of Finchale and Bartholomew of Farne, extensively modelled on St Cuthbert’s example, were added to the north-eastern Durham familia.

This volume takes an interdisciplinary approach to these north-eastern saints, offering a comprehensive snapshot of new scholarship within the field. The first section focuses on the most eminent saints and hagiographers of Anglo-Saxon Northumbria: Cuthbert, Wilfrid and Bede. The second section examines their utility for the twelfth-century, Anglo-Norman community at Durham, and surveys the cults which emerged alongside, including the early saint-bishops of Hexham Augustinian priory. The third section reviews the material culture which developed around these saints in the fourteenth and fifteenth centuries: their depiction in stained glass, their pilgrimages and processions, and the use of their banners in the Anglo-Scottish wars. A concluding essay re-evaluates the north-eastern cult of saints from post-Reformation perspectives.

The Saint in His Setting. The Physical Environment of Shrines in Northern Britain before 850

St Cuthbert and the South: A North of England Saint and South  of England Reformers in the Late Tenth and Early Eleventh Centuries

Godric and the Wild Man: The Resonances of Asceticism in  Reginald of Durham’s Vita of St Godric of Finchale

What a Performance: The Songs of St Godric of Finchale

Banners of the Northern Saints

Contested Reputations: Attitudes to Some Northern Saints after the Reformation 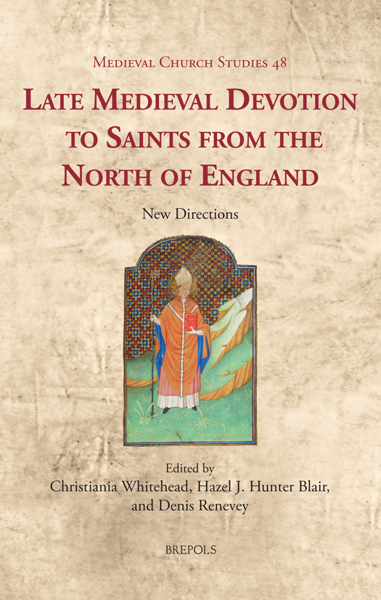