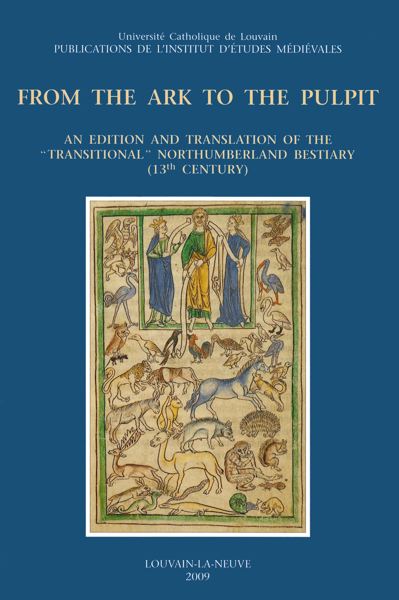 From the Ark to the Pulpit

An Edition and Translation of the “Transitional” Northumberland Bestiary (13th century)

“It can be supposed that most of readers will read the English translation and the rich comments either from the point of view of the history of science, and of zoology in particular, or simply to learn about the complexity of medieval culture. In both cases they would be safely guided by this book and they will undoubtedly find it useful, interesting and valuable.” (Alena Hadravová, in: Archives internationales d’histoire des sciences, Vol. 62, N° 168, June 2012, p. 366)

This publication of the thirteenth-century Northumberland Bestiary, formerly the Alnwick Bestiary, provides a complete critical edition of one of the most developed Medieval Latin bestiaries. Even among the few manuscripts in its group, called the “transitional” family of bestiaries, the Northumberland Bestiary is unique: it crystallizes the fluid combination of narrative, animal lore, and spiritual guidance that characterize the genre. Beginning with creation and covering the gamut of real and imaginary beasts, birds, fish, serpents, worms, man, and trees, this bestiary is a spiritual journey as well as a “scientific” manual. Under the pretense of zoology, the bestiary is a metaphor for divine creation, a message from the creator through creation. Medieval preachers used the pretense as well as the spiritual allegories that accompany the creatures to instruct their congregations.
The Northumberland Bestiary was the last known bestiary in private hands until 2007 when the J. Paul Getty Museum acquired it. Written about 1250, in a small, early gothic book hand, it is one of the richest of all Latin bestiary manuscripts produced in England. There are 112 finely drawn and colored miniatures among its 74 leaves as well as an elegant and discrete “Sermon on How a Sinner May Be Pleasing to God" (Sermo qualiter peccator Deo placere valeat), which was likely directed to clerics who were training to work as pastors.
For a general as well as a scholarly readership, this edition captures the charming essence of the bestiary tradition in a readable Latin-English format.  The book comprises a general introduction discussing the text and the manuscript, the Latin text with English translation, notes and commentary, a description of all the miniatures, and reproductions of about thirty of them.