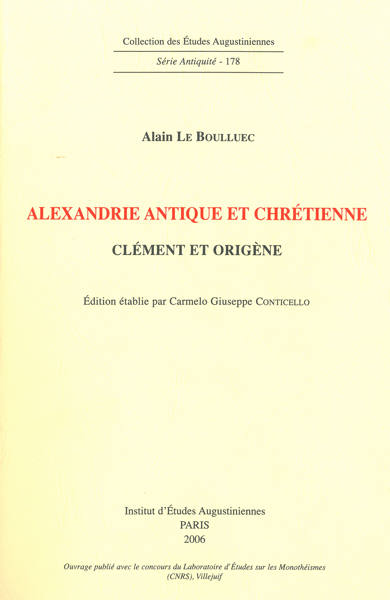 "Professor Le Boulluec could justly be called one of the finest scholars of early Christian Alexandria alive today. This new collection of previously published essays represents some of the achievements of thirty-five years of scholarship on Clement and Origen. Written in a lucid and unfussy French prose style, they distil sharp insights on every page. (...) This is an indispenable volume for students of Clement, Origen, and their world." (Jane Heath, in: The Expository Times 125 (10), July 2014, p. 510-511)

"One of the greatest values of this collection of essays is the fact that this volume gives us access to detailed knowledge and vast experience of dealing with Clement of Alexandria and Origen by one of the most important French patristic scholars of recent years. (...) This study may serve as an important point of reference to new generations of students, while also preserving some parts of Alain Le Boulluec's academic legacy, without which our knowledge of Clement and Origen would be diminished." (Piotr Ashwin-Siejkowski, in: Journal of Theological Studies, 66.1, April 2015, p. 439-441)