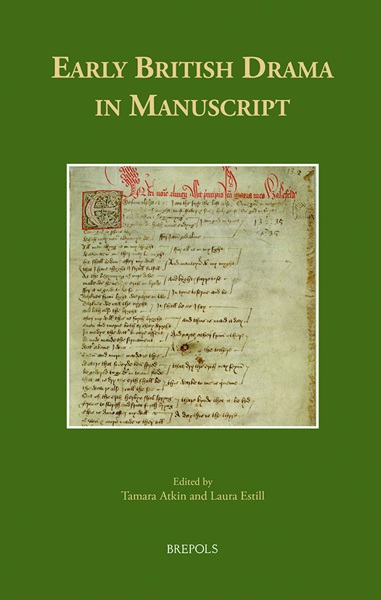 Early British Drama in Manuscript is the first book-length study to focus exclusively on medieval and early modern drama in the context of a rich and varied manuscript culture.

“ As the eagerly anticipated flagship volume of ‘British Manuscripts’, a new ser­ies published by Brepols under the editorship of A.S.G. Edwards, Early British Drama in Manuscript exceeds expectations and sets a high standard for future volumes (…) Brepols has produced a book of impressive quality, befitting the scholarship it contains. Early British Drama in Manuscript is a weighty volume, literally and intellectually.” (Brett Greatley-Hirsch, in Early Theatre, 23.1, 2020, p. 225-29)

“Credit is due to Tamara Atkin and Laura Estill for wrangling these twenty fine-grained essays into an excellent collection on British dramatic manuscripts between 1400 and 1700.” (Micha Lazarus, in The Library: The Transactions of the Bibliographical Society, Volume 21/4, 2020, p. 540)

“Editors Tamara Atkin and Laura Estill have assembled a rich and varied set of material at the intersection of dramatic studies and manuscript studies, and, thanks to this underlying methodological innovation, the volume coheres intellectually to an impressive degree. As the first volume in A. S. G. Edwards' "British Manuscripts" series at Brepols, it is a sign of more good things to come.” (Alexandra Reider, in The Medieval Review, 21/03/2021)

“The essays collected here are thoughtfully arranged to effectively demonstrate this aim. Indeed, the volume is a valuable addition to the study of early British drama.” (Catherine Clifford, in Journal of British Studies, 60, 2021, p. 691)

“In a collection of twenty-one essays devoted to early British dramatic manuscripts, one would expect to find discussions that address familiar debates about early plays, introduce newly examined manuscripts related to the drama and theater, offer both theoretical and material considerations of these documents, and detail advances in the technological study of manuscript plays. Early British Drama in Manuscript commendably performs all of these tasks.” (Jonathan Walker, in Manuscript Studies:  A Journal of the Schoenberg Institute for Manuscript Studies, 6/1, 2021, p. 185)

“In the tradition of the manuscripts the authors so perceptively discuss, Early British Drama is itself a ‘fine book’ which fully justifies its purchase price. The generous illustrations, including timelines, computer-generated charts, photographs of manuscript pages and bindings, an ‘Index of Manuscripts’ and a ‘General Index’, testify to the editors’ care. Readers are empowered to check descriptions and to enjoy the manuscripts for themselves. A ‘Works Cited’ appended to each contribution facilitates further reading in what is a fascinating and continually developing field of scholarship.” (Cheryl Taylor, in Parergon, 38/2, 2021, p. 190)

This collection of essays examines medieval and early modern drama in the context of a rich and varied manuscript culture. Focusing on the production, performance, and reception of dramatic documents made in Britain between 1400 and 1700, the essays in this book shed new light on the role of dramatic manuscripts in a range of different social and literary spheres. From extant manuscripts of England’s mystery cycles to miscellanies kept by seventeenth-century readers, the documents discussed in this volume reflect a culture of producing and using drama in ways that have been overlooked by the recent critical focus on drama and print by theatre historians and literary critics. By showing the various continuities, exchanges, lendings, and borrowings between medieval and early modern scribal practices, as well as between manuscript and print practices, this volume interrogates accepted critical narratives about the way that drama has been historicized.

The Brome Abraham and Isaac and Impersonal Compilation — JOE STADOLNIK

The Play of Wit and Science: Evidence for the Performance of a Choir School Manuscript — LOUISE RAYMENT

Speech and Silence in an Actor’s Part — JAKUB BOGUSZAK

Comedies and Tragedies ‘read of me’ and ‘not yet learned’: Dramatic Extracting in Bodleian Library MS Rawlinson D 952 — BEATRICE MONTEDORO

Seeing is Believing: External vs. Internal Evidence in the Controversy over the Ireland Forgeries — ANTONIA FORSTER