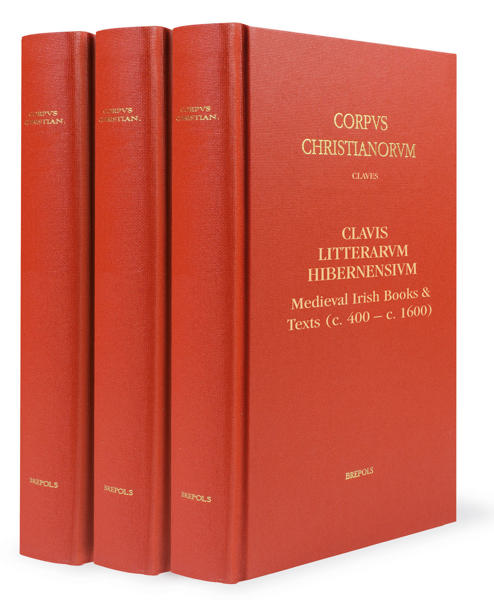 The first comprehensive survey of all medieval Irish literature, Latin, Irish, French & English, the CLH is a measure of the state of medieval Irish studies today.

“We congratulate Ó Corráin for his pioneering labour of love and Brepols for maintaining their impressive support for mediaeval literature in general and Irish studies in particular.” (J.K. Elliott, in Novum Testamentum, 60, 2018, p. 222)

"It is no exaggeration to say that these books will open up the exegesis of this literature in ways that were formerly impossible. (…) It will be the task of the next generation of scholars to pursue this work piecemeal and to take up the challenge that O C. has bequeathed.” (Michael Clarke, in Mittellateinisches Jahrbuch, 53/3, 2018, p. 499-500)

“Even a brief perusal of this work demonstrates the quantity and quality of the medieval Irish literary achievement in both Latin and the vernacular and across a variety of genres. That he has largely achieved his goal is testament to the breadth and depth of Ó Corráin’s knowledge, built over the course of a career spanning nearly half a century. The result of his labor of love is a landmark accomplishment that speaks in important ways about the current status of the discipline and will be valued by future generations of students and scholars alike.” (Patrick Wadden, in The North American Journal of Celtic Studies, 3/1, 2019, p. 85)

"In a towering beacon of scholarship of the kind that other countries expect of learned academies or institutes of advanced studies, Prof. Ó Corráin in this marvellous Clavis single-handedly (...) has produced 'a monument more lasting than bronze' (...) The Clavis is not just the book of the decade in Early Irish Studies; it is a work for the ages." (Dáibhí ó Cróinín, in History Ireland, vol. 27, no. 3, May/June 2019, p. 58-59)

“For the scholar with a particular interest in medieval Ireland, this book offers something far greater: by ordering and enumerating this mass of sources with appropriate bibliographical references within the confines of one volume, Donnchadh Ó Corráin has helped to make the medieval Irish literary tradition as a whole more visible, and more comprehensible. This Clavis will stand as a lasting testimony to a master scholar.” (Clare Stancliffe, in The Journal of Theological Studies, 70/2, 2019, p. 884)

"Only occasionally does a work appear whose impact on our praxis of scholarship is so great that anyone working in the field must thereafter take account of it. Even fewer are the occasions when a work that is, of its nature, taxonomic and bibliographical can claim such a significance. (...) looking at entry after entry one is staggered that Ó Corráin could not only assemble such a vast array of detail but orchestrate it so that others’ work is focused and lightened over the whole range of the material. (...) The CLH is, therefore, a measure of the state of medieval Irish studies today." (Thomas O'Loughlin, in The Irish Theologcial Quarterly 85/1, 2020, p. 80–86)

“Ó Corráin’s erudition and status as one of the founding fathers of the modern discipline of Irish medieval history qualified him as the perfect editor of this authoritative, comprehensive, rationally organized, and easy-to-use repertory, which is set to reshape our understanding of key strands of the field of medieval Irish studies. (...) scholars of all disciplines, who are interested in medieval Irish sources, will now have their go-to work of reference for decades to come.” (Roy Flechner, in Early Medieval Europe, 28/3, 2020, p. 500)

Donnchadh Ó Corráin († 2017) was emeritus professor of medieval history at University College-National University of Ireland, Cork. He was a member of the Royal Irish Academy, visiting Professor at the University of Pennsylvania, 1978-9; and Senior Visiting Research Fellow at Balliol College Oxford, 1993-4. He was founder-editor of Peritia, 1982-2014 (25 volumes). He established the CELT on-line corpus of Irish texts (celt.ucc.ie). He has published widely on medieval Irish literature, text history, vernacular law, church history, canon law, genealogy, politics, kingship, social history, the Vikings, and other topics.

This three-volume ground-breaking and comprehensive bibliography of Irish texts and manuscripts is the first study of its kind to describe the entire historical and literary output of Irish writers, at home and abroad, throughout the middle ages (4th to 17th centuries). It surveys writers in Latin and the vernaculars, ranging through biblica, liturgica, computistica, hagiographica and grammatica, as well as all the genres of Irish and the other vernacular writings of Ireland
The focus is on both individual manuscripts and textual transmission. In the case of manuscripts it succinctly lists all the salient information (origin, provenance and date, foliation, pagination and dimensions), accompanied by a detailed chronologically arranged bibliography for every codex. For individual texts it lists the manuscripts in which they occur, or, when relevant, where such a list can be found, together with a comprehensive bibliography of relevant publications. For both manucripts and texts, there are running cross-references to the standard works of reference. The Index Manuscriptorum is the most comprehensive of its type ever provided for this subject. Moreover, the chapters on manuscripts and texts written in Irish provide the first full treatment of several areas, including annals, genealogies, vernacular law, early poetry, bardic poetry and metrics.

2. Early Codices in Ireland and Britain

6. Irish Books and Authors Abroad I: Columbanus, Luxeuil, and Bobbio

9. Irish Scholars and Greek in the West