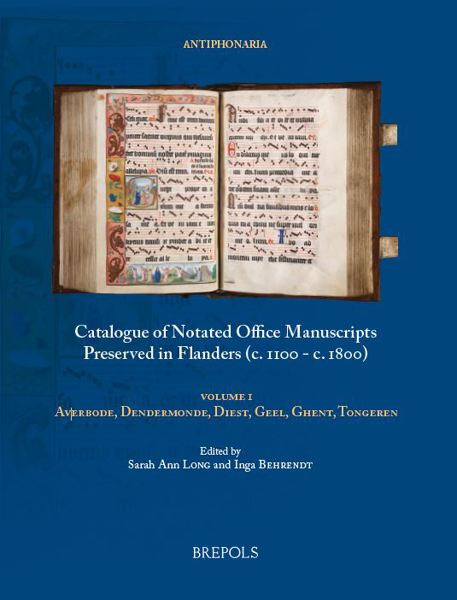 This volume presents a collection of manuscript antiphoners and other liturgical books containing music from the archives of Averbode, Dendermonde, Geel, Ghent, and Tongeren, from 1100 until 1800.

“This catalogue is a major accomplishment.” (B. Haggh-Huglo, dans le Bulletin Codicologique Scriptorium, 2, 2015)

Sarah Ann Long is Assistant Professor of Musicology at Michigan State University. From 2008 to 2010 she was a research fellow of the Flemish Government for her work on the Antiphonaria project. Her research, for which she was awarded a Marie Curie IEF postdoctoral fellowship from the European Commission from 2011 to 2012, focuses on confraternity liturgies in northern France and the Low Countries from the thirteenth through the sixteenth centuries.

Inga Behrendt is a research fellow at the Musicology Institute of the Eberhard Karls University Tübingen, and Professor of plainchant and hymnology at the Hochschule für Kirchenmusik der Diözese Rottenburg-Stuttgart in Rottenburg. From 2009 to 2011 she was a research fellow of the Flemish Government for her work on the Antiphonaria project. Her research concentrates on plainchant and arrangements of early music for piano in the nineteenth century.

The present catalogue of manuscript antiphoners and other office books containing music in the collections of Averbode, Dendermonde, Diest, Geel, Ghent, and Tongeren is the first in the series Antiphonaria: A Catalogue of Notated Office Manuscripts Preserved in Flanders (c.1100–c.1800). Antiphonaria is meant to aid scholars in all areas of medieval studies with their exploration of liturgical practices in the Low Countries.

The books in this volume represent those currently held at the abbey archives in Averbode, which houses one of the most cohesive Premonstratensian collections in the Low Countries; the Sint-Pieter en Paulus Abdij in Dendermonde, which preserves the earliest source for the music of Hildegard of Bingen; the Sint-Sulpitiuskerk in Diest; the Archief Sint-Dimpnakerk in Geel, whose holdings include one of the few surviving sixteenth-century antiphoners for a secular church; several archives in Ghent, including the Universiteitsbibliotheek, the Sint-Baafskathedraal, the Musea voor Schone Kunsten, and the Rijksarchief; and the Onze-Lieve-Vrouwebasiliek in Tongeren, which holds one of the most substantial and homogeneous groups of sources from a collegiate church in the Low Countries.

An introduction presents a summary of each collection and the parameters of the inventories. Each catalogue entry contains a codicological description of the manuscript; a detailed description of its origin, usage, and history; and a full inventory of its contents, giving special attention to the hymns, first Matins responsories, and first Lauds antiphons, all indexed at the end of the volume.