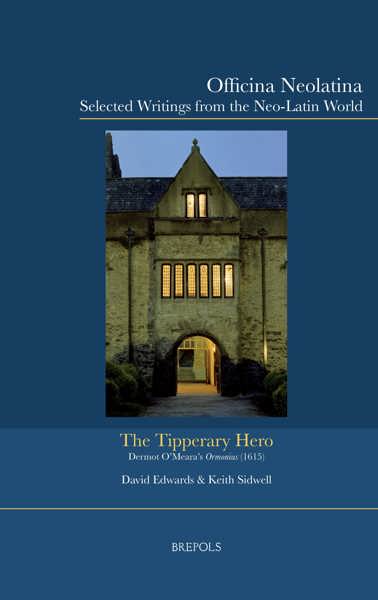 The Ormonius is a five-book heroic poem of nearly 4,000 hexameters on the military career of the 10th Earl of Ormond, Thomas Butler, a key figure in the Elizabethan conquest of Ireland. Written by Ormond’s fellow-Irishman, the doctor (and Oxonian) Dermot O’Meara, it was published in London by Thomas Snodham in 1615, and was probably aimed at James VI & I and his court.

Ormond (1531-1614), brought up at the English court and edu­cated with Prince Edward (later briefly King Edward VI), was a powerful warlord in Ireland, but loyal to the English crown. His military activities could easily be represented as those of a “scourge for rebels” and it is upon this aspect of his image that O’Meara focuses. The poem begins with his part in crushing the revolt of Thomas Wyatt against Queen Mary in England in 1554 and then moves to his activities in Ireland, focusing  upon relatively minor campaigns against the Scottish Gaels in Ulster, as well as against Shane O’Neill, the earl of Desmond, and many other rebels in Leinster and Munster. It ends in the late 1590s with  Ormond’s involve­ment in confronting the  Tyrone rebellion and the blindness that closed his military career.

Although writing a poem firmly within the classical didactic epic tradition, O’Meara utilises the framework of a contemporary vernacular Gaelic poetic form called the cathréim in its construc­tion. While specifically intending his creation as a true record of Thomas Butler’s deeds, O’Meara nonetheless makes use of the divine machinery of Vergil to underline the idea that the inspiration for rebellion comes from Hades, while the power of kings is under­pinned by Heaven. Though  borrowing heavily from the poetic stock of Vergil, Ovid, Silius Italicus and Claudian (to say nothing of and Lucretius, Lucan, Seneca, Valerius Flaccus and Statius), O’Meara creates an entirely (early) modern work, which produces through the medium of the learned language a classically enhanced reflection of the world in which he lived, ideologically slanted towards an Ireland firmly attached to the British Crown.

The edition has been prepared jointly by Keith Sidwell, Emeritus Professor of Latin and Greek at University College Cork, former Director of the Centre for Neo-Latin Studies and Adjunct Professor in the Department of Greek and Roman Studies, University of Calgary, and Dr David Edwards, Senior Lecturer in History at University College Cork and Director of the Irish Manuscripts Commission, author of a recent monograph on the Butler Lordship.