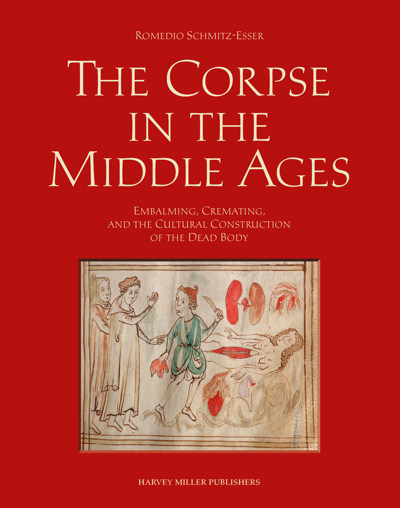 The Corpse in the Middle Ages: Embalming, Cremating, and the Cultural Construction of the Dead Body

"A study of the dead body in the context of cultural studies and the history of mentality, this expansive volume covers the cultural construction, burial, and destruction of the corpse in medieval European society." (L. C. Attreed, in Choice, 59/6, 2022)

“A good scholarly contribution, after all, raises additional questions and points the way to further research. The Corpse in the Middle Ages will undoubtedly prompt further exchange on, and discussion of, many related topics.” (Charlotte A. Stanford, in The Medieval Review, 14/05/2022)

To what extent are the dead truly dead? In medieval society, corpses were assigned special functions and meanings in several different ways. They were still present in the daily life of the family of the deceased, and could even play active roles in the life of the community. Taking the materiality of death as a point of departure, this book comprehensively examines the conservation, burial and destruction of the corpse in its specific historical context. A complex and ambivalent treatment of the dead body emerges, one which necessarily confronts established modern perspectives on death. New scientific methods have enabled archaeologists to understand the remains of the dead as valuable source material. This book contextualizes the resulting insights for the first time in an interdisciplinary framework, considering their place in the broader picture drawn by the written sources of this period, ranging from canon law and hagiography to medieval literature and historiography. It soon becomes obvious that the dead body is more than a physical object, since its existence only becomes relevant in the cultural setting it is perceived in. In analogy to the findings for the living body in gender studies, the corpse too, can best be understood as constructed. Ultimately, the dead body is shaped by society, i.e. the living. This book examines the mechanisms by which this cultural construction of the body took place in medieval Europe. The result is a fascinating story that leads deep into medieval theories and social practices, into the discourses of the time and the daily life experiences during this epoch.

ABOUT THE TRANSLATION
FOREWORD


INTRODUCTION
The Constructed Corpse: Methodology, Structure, and Goals
Burial between Norm and Practice
St Augustine and the “Constructed” Sanctity
The Staged Corpse
No Fear of the Dead
Body Parts and the Gaze Upon the Dead Body
A Topic between Popular Hype and Historical Lack of Interest: The State of Research


CHAPTER I: THE BURIED CORPSE
The Corpse and the Resurrection
The Soul, the Corpse, and the Beyond
The Eternal and the Eternally Disturbed Grave
Drowning and the Element of Baptism
Cremating the Dead: Between Concern and Banning
The Proper Burial in the Middle Ages
The Quest for the Phantom: The “Standard” Burial in the Christian Middle Ages
Symbolism of Light and the Position of the Dead in the Grave
Solitary Burial and Group Affiliation of the Corpse
The Corpse is Coming to the Living: The Cult of the Martyrs and the Burial with Saints
The Development of the Church Graveyard
Interment in the Time of Crisis
War Dead and Their Graves
Death as a Result of Epidemics, the Black Death, and Burial
The Corpse Portrayed
Summary


CHAPTER II: THE HOLY CORPSE
Real Presence and the Cult of Relics
The Holy Corpse as a Self-Determined Being
Transfer of Relics and Fragmenting of the Corpse
Desired Relics, Corpse Desecration, and the Dead as a Valuable Treasure
The Corpse as Proof of Sanctity
“Corpus Incorruptum,” Mumification, and Created Sanctity
The Aromatically Smelling Corpse
Innocent Liquids: The Leichenöl
Medieval Complementary Logic: The Corpses of the “Valde Boni” and the “Valde Mali”
Summary


CHAPTER IV: AUTHORITY AND THE CORPSE
Visiting a Corpse—the Visit by a Corpse
The Ruler's Corpse as a Sign of Victory
The Specialists of Death and Their Ruler Clientele: The Location of the Grave and the Row of Corpses as a Means for Legitimization
Conversion, Legitimacy, and the Beloved Bones of the Ancestors
Summary


CHAPTER V: THE COMMUNITY OF THE DEAD AND THE CORPSE IN THE "ORDO"
Hierarchy of the Funeral Sites
The Unclean Corpse and the Church as a Burial Site
Old Age, Gender, and Kinship: The Hierarchy of the Burial Sites in Medieval Cemeteries
Grave Donations Between Here and the Afterlife
Clothing Provides Status to the Dead: Insignia of Social Class and the Identification of Corpses
Pedum, Paten, Chalice, and Ring: The Burial of Priests and Bishops
Crown, Scepter, Orb, and Royal Vestments:
The Burial of Emperors and Kings
Does God Forget the Names of the Dead? Tables with Inscriptions as Burial Objects and Inscriptions on the Sarcophagus
Monastic Habit and Valuable Thread: Monks, Noblemen, Simple People, and Their Clothing for the Beyond
Objects Useful for the Corpse
Relics, Torture Instruments, and Hosts: Supporters for the Dead
Written Documents, Indulgence Letters, and Seals as Documents of Faith
Dead Pilgrims
Plants and Herbs, Holy Water, Incense, and Coal: Funerary Objects Between Practice and Symbolism
Shoes for the Day of Judgment
Summary


CHAPTER VI: THE CORPSE AND THE LAW
The Corpse as the Interim Occupant of an Office
The Corpse as Both Subject and Object of the Law
The Corpse at Court
Strikes with the Sword, Bleeding Corpses, and the Beginning of Forensics in the Middle Ages
The Cemetery as a Place of Trial
Marking Borders, Church Authority, and the Value of the Corpse
The Funeral of the Corpse as an Economic Factor
The Corpse and Marking of Borders
Summary


CHAPTER VII: THE LIVING CORPSE
The Sleeping Dead and Its Physically Continued Life
Signs of Life: Speaking, Bleeding, and Continued Growth of Nails and Hair
Funeral Ritual to Prevent the Appearance of Revenants
Placing Weights on the Corpse and the Separation and Breaking of the Legs
Decapitation
Impalement, Nailing Down, and Interment at a Crossroad
Vampires in the Middle Ages? The Cremation of Revenants
Obol and Payment of the Dead: Funerary Objects as a One-Way Ticket to the Afterlife?
The Corpse Besieged by Demons
The Active Corpse
Summary


CHAPTER VIII: THE DESTRUCTION AND DESECRATION OF CORPSES
Deviation from the Funerary Ritual as Punishment and Exclusion
Denial of Burial in Sacred Ground
On Children Under the Church’s Eaves and Pilgrimage Sites: The Unbaptized Dead and Children According to Archaeological Data
Suicide and the Corpses of Suicide Victims
Excommunicated Corpses and Death Under the Interdict
The Example of Emperor Henry IV
A Few Years of Eternity, or Was There a Permanent Exclusion of Those Who Had Been Excommunicated
The Last of the Hohenstaufen and Their Excommunication: Conrad IV, Manfred of Sicily, and Conradin the Younger
The High Medieval Debate on the Punishment of Corpses
Exhumation as a Weapon in the Fight Against the Cathars
The Growing Concern with the Moral Integrity of the Dead: Individuals Responsible for Church Desecration, Those Who Rejected Confession, and Those Dead Who Had Died without Their Guilt
Having Been Forgiven and Atoned
In the Case of Doubt Against the Dead: The Liturgists’ Fear of the Unknown and the Foreign
Death with the Lance in Hand: The Burial of Those Who Had Died in a Tournament
The Burial of the Executed
Being a Warrior and a Christian: The Exclusion from Burial in Light of Discourse Theory
Corpse Desecration
The Case of Pope Formosus
Corpse Desecration as a Punishment
The Ruler's Corpse and the Use of Scalps: Corpse Desecration as a Sign of Physical Superiority
Burning and Physical Annihilation
The Symbolism of Fire
Death by Fire in the Early Middle Ages: Arsonists, Sodomites, Poisoners, Magicians, and Unusual Women
The Burning of Heretics and Witches in the High and Late Middle Ages
The Destruction of Corpses in the Early Modern Time
The Humble Corpse
Burial in Simple Clothing
The Corpse Placed on Ash
Paradise and the Naked Earth: The Burial Site as a Sign of Christian Humility
The Penitent Approaching the Day of Judgment: Pippin the Short and Prone Burial
Humility of the Medieval Corpse
Summary


CHAPTER IX: THE CORPSE AS MEDICINE AND MIRACLE CURE
The Corpse as Royal Blessing?
The Corpse as a Medium to Create Miracles and Magic
Charges Against Heretics, Witches, and Jews: Ritual Murder and Mirroring the Eucharist
The Corpses of Executed People as Medicine
“Mumia vera”—Mummies as a Medical Drug
Building Sacrifice and the Corpse as a Weapon
Summary


CHAPTER X: HEART, HEAD, AND HAND—THE BODY PARTS OF CORPSES FROM AN ANTHROPOLOGICAL AND ANATOMICAL PERSPECTIVE
The Practice of Multiple Burials in the High and Late Middle Ages
Heart
Head
Hand
Summary 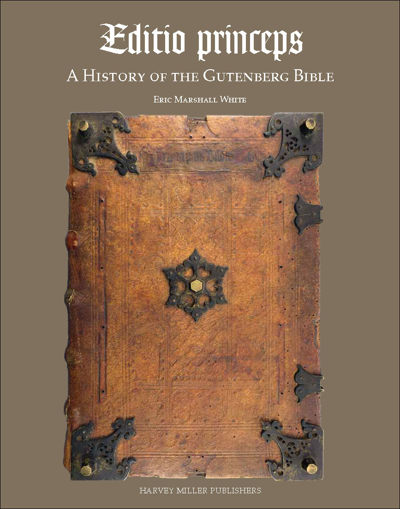 Editio princeps: A History of the Gutenberg Bible View publication