Book Series Mediaeval Sources in Translation, vol. 49
About this series 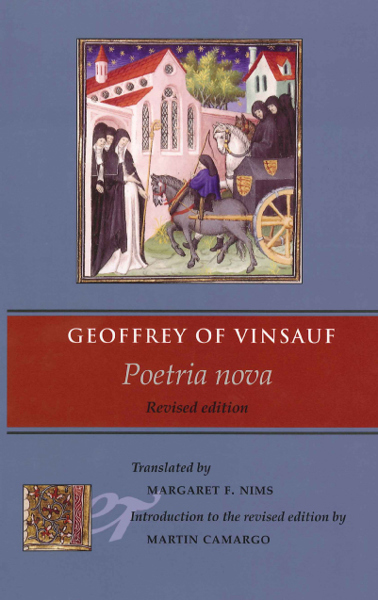 The medieval literary heritage is inextricably connected with the theory and practice of rhetoric. Rhetoric provided not only a technical repertoire but informed the very habits of mind of medieval writers and readers. Among the many rhetorical treatises of the twelfth and thirteenth centuries, the Poetria nova holds an especially important place.

When this translation by Margaret Frances Nims was published in 1967, scholarship on the Poetria nova had yet to progress much beyond the point to which Edmond Faral had brought it in his 1924 edition of the Latin text. Since then, the theory and practice of medieval rhetoric have claimed a space within the broader historiography of rhetoric, and the Poetria nova has benefitted from this development at multiple levels. There are excellent studies that focus on specific features of the work’s teaching, place it in relation to the other “arts of poetry” or, more accurately, “arts of poetry and prose” composed between the late twelfth and the fourteenth centuries, and situate that genre within the context of medieval rhetoric as a whole.

In a new introduction written especially for this revised edition, Martin Camargo surveys and critically analyzes these developments.  He has also added explanatory and textual notes, and emended the translation where necessary.