Book Series Studies and Texts, vol. 229
About this series 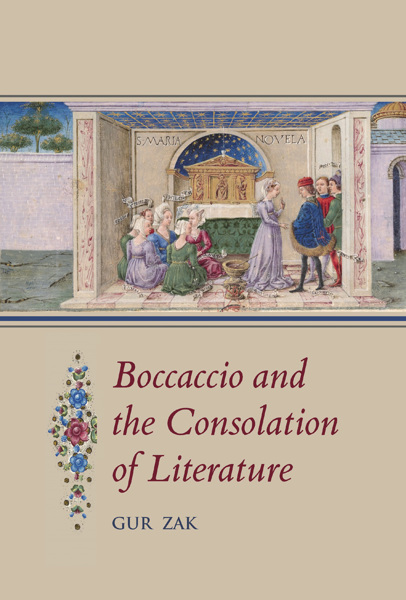 Boccaccio and the Consolation of Literature

“Gur Zak’s Boccaccio and the Consolation of Literature has much to offer many readers. As the first sustained and systematic treatment of Boccaccio’s consolations, it combines coverage of large portions of his corpus with insightful and often innovative close readings and critical re-framing of his texts. Individual passages and whole works emerge from Zak’s analyses in a new and richer light. The book also deftly reconstructs the carefully organized web of intratextual and intertextual connections that Boccaccio established with literary and philosophical trends in his day, from Aristotle and Aquinas to Dante and Petrarch. In so doing, it paints a complex and compelling picture of Boccaccio as a writer able to reflect critically on the work of culture. Zak’s book is as versatile as the material it analyzes. Boccaccio’s works possessed an ethical bent, which involved, as the author convincingly argues, empowering readers to use literature in their historically determined, particular as well as practical, quest for consolation.” — Simone Marchesi, Princeton University

Gur Zak teaches in the Departments of Comparative Literature and Romance Studies at The Hebrew University of Jerusalem. He is the author of Petrarch’s Humanism and the Care of the Self (2010). His articles have appeared in I Tatti Studies in the Italian Renaissance, MLN, and Speculum, among other journals.

The reader of Boccaccio’s voluminous writings, from the early Filocolo through the Decameron and to the later Epistles, cannot help but marvel at the pervasive engagement with the power and reach of consolation. Time and again, his protagonists suffer heartache and tribulation and seek comfort in the words of others or, significantly, in the reading of literature. These scenes are accompanied, tellingly, by the author’s own declarations for the care and solace of his readers. Although scholars have long recognized its importance, this wide-ranging and multifaceted exploration of the consolatory value of literature has not received the attention it deserves. Boccaccio and the Consolation of Literature is the first sustained study of Boccaccio’s consoling fictions as well as his reflections on the way literature can, and should, offer solace.

Across five interlocking chapters, the book analyzes the affective, exemplary, and cognitive modes of consolation that mark the poet’s works; but it also underlines the critical dialogue with the ancient and medieval traditions Boccaccio inherits. While his narratives introduce figures and tropes that expound Stoic, Boethian, and Dantesque views of consolation – calling to overcome sorrow through curbing the passions that lead to grief – Boccaccio repeatedly dramatizes the limits of these traditions. In laying bare these limits and inviting readers instead to find comfort in shared sorrow or in the active pursuit of worldly desires Boccaccio fashions a new vision of consolatio for the later Middle Ages.