Book Series Studies and Texts, vol. 164
About this series 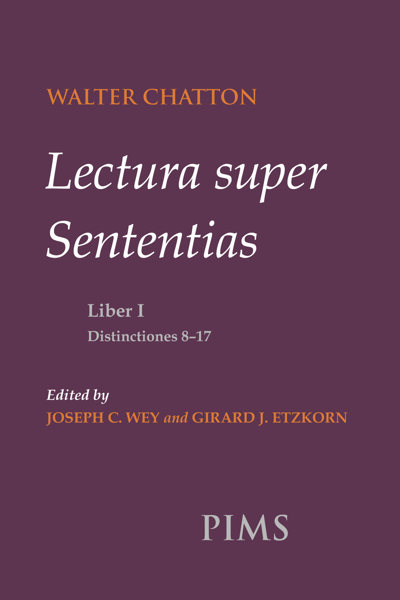 "Etzkorn and Wey's volume is up to the same high standards as the others and will be quite welcome to students and scholars of Ockham studies, theology, church history, and philosophy" (Rondo Keele, in: The Journal of Medieval Latin, vol. 20/2010, p. 344)

This volume constitutes the second part of a project to publish critical editions of all the commentaries of Walter Chatton on the Sentences of Peter Lombard. The Reportatio super Sententias, the written account of Chatton’s lectures delivered during the years 1321–1323, was published by the Institute in five volumes: Prologus (1989), Libri I–IV (2002–2005), edited by †Joseph C. Wey, CSB and Girard J. Etzkorn. The project was begun by Father Wey with his edition of the Prologus, after which he entrusted his transcriptions of the Reportatio and the Lectura, together with documentation of sources, to Professor Etzkorn so that the project could be continued.

The Lectura super Sententias, presented here, is Chatton’s second commentary (1323–1324) on Book 1 of the Sentences, which is incomplete, ending in the middle of distinction 17, question 7. This volume contains distinctions 8–17. The purpose of the edition is to provide scholars and historians of medieval thought with a reliable text with accompanying documentation that should allow for an accurate evaluation of Chatton’s oeuvre in its historical context and provide the basis for translations and detailed studies.

As in the Reportatio, Chatton’s main opponent in the Lectura is William of Ockham whose opinions and arguments are cited in almost every question of every distinction. Likewise cited and opposed are the opinions of Peter Aureoli. With regard to Ockham, it has been shown that he and Chatton were in the same Franciscan friary, either in London or in Oxford, and Adam Wodeham, while being a faithful disciple of Ockham, was likewise the reportator of Chatton’s Reportatio. Throughout the Lectura, Chatton defends the opinion of Duns Scotus, in particular on matters relating to the divine nature, essence, and person and to the ‘principle of individuation.’

The critical edition adopts the ‘rational method’ favored by the eminent medievalist Victorin Doucet, OFM, whose purpose is to retrieve the author’s meaning from the surviving manuscript or manuscripts. Distinctions 8–17 of the Lectura survive in only one manuscript, viz. Florence, Bibl. Nat. Conv. Soppr. C.5.357 (here assigned the siglum F]. Misreadings, marginal notes and omissions are relegated to the apparatus criticus. References to authors (some unnamed) are thoroughly documented in the apparatus fontium.

The Apostolic See and the Jews. Documents: 1394-1464 View publication