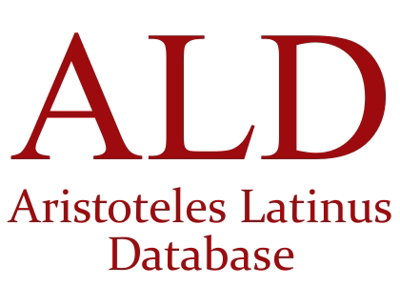 The complete corpus of medieval translations of the works of Aristotle This database contains, first of all, those texts that have been critically edited in the printed Aristoteles Latinus series. Other corpora complete the database, whether editions that have already been published or ones in preparation or unpublished, to produce the finished Aristoteles Latinus.

The particular benefit of this electronic edition lies in the fact that it provides an integrated database of all the medieval translations of Aristotle's work. The electronic database is not identical to the printed edition, as it omits the prefaces describing the manuscript tradition; nor does it include the apparatus of variant readings, the Greek-Latin comparative apparatus, or the bilingual indexes of the printed version.

The texts included are prepared and supervised by the Aristoteles Latinus Centre of the Catholic University of Leuven, and produced in collaboration with the CTLO. The aim is to provide the academic world a scholarly product of the highest quality.

The online version of the Aristoteles Latinus Database is available on BREPOLiS.